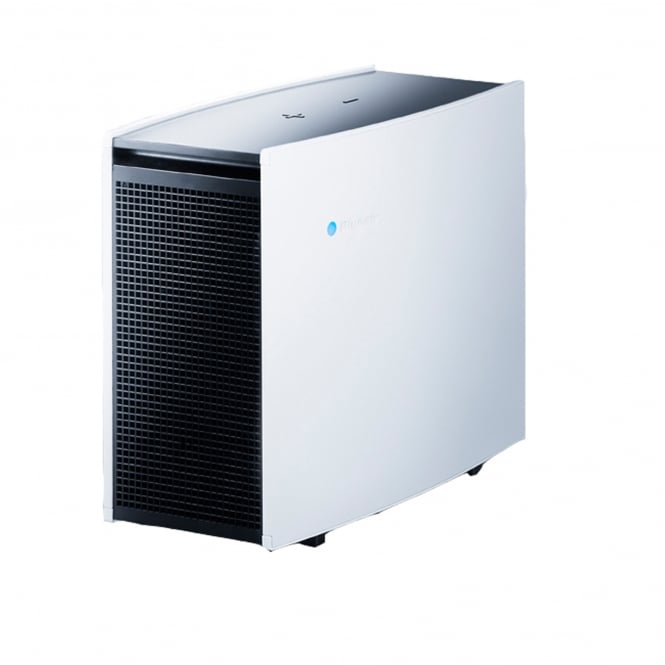 An introduction to the Blueair Pro Series
The new range of professional air purifiers from Blueair, with the highest air cleaning capacity and purification efficiency in the industry. The Pro series units are perfectly suited for large rooms and offices demanding the highest achievable levels of indoor air quality.

The Blueair Pro M  Smokestop
This, the first model in the new Blueair Pro line up is the most compact model and is ideal for a single office, large living room, bedroom or playroom. It delivers exceptional performance for its compact size and is specially optimised for the removal of tobacco smoke odours, traffic fumes, No2 ( Nitrogen Dioxide ), VOC's ( Volatile Organic Compounds ). It also removes hazardous particulate pollutants such as allergens, bacteria, viruses, pet dander, dust, and harmful particles all the way down to 0.1 micron in size.

Designed to purify the air in rooms up to 36m2
Although very compact, the Pro M offers enough air volume to purfiy the air in rooms as large as 36m2 ( 390 square feet ) up to five times an hour. That means complete purification from floor to ceiling, corner to corner once every twelve minutes. This is around four or five times faster than any other brand we know of and to top it all off the Pro M uses around the same amount of energy as a light bulb.

Can you hear a whisper?

Quieter than a whisper on the lowest setting, and no louder than a quiet conversation on the highest, the Pro will never distract you from working or keep you from sleeping. The Pro series uses Blueair's patented HEPASilent® Technology to quietly capture 99.97% of airborne particles down to 0.1 micron in size. It is worth noting that the majority of Hepa air purifiers you can buy actually only filter particles down to 0.3 microns. This means the filter inside the Blueair captures particles up to three time smaller than those in standard machines, and is therefore able to trap a greater number of the smaller more hazardous particles like viruses and bacteria.

Engineered in Sweden - Designed for your  home
The housing on all Pro series units is made from galvanized steel and then powder coated to provide an exceptionally sleek, white finish. Each unit delivers maximum clean air delivery in a very compact design and even the largest model, the aptly named XL is designed to blend in seamlessly with your home or work environment.

Revolutionary New  Filter Shape - V is for versatile.
The innovative new v-shaped hepa filter allows a much larger filter surface area to be slotted into a surprisingly small amount of space. The clever design also makes changing the filter a cinch. Simply draw the old filter out and click the new one in place.
The new modular filter concept of the pro series means that all the models in the range use exactly the same filter cartridges. This Pro M uses a single cartridge. The Pro L uses two, and the Pro XL uses three.

Showing 4 of our total 8 reviews, with an average rating of 5 stars. Read all 8 reviews for M Smokestop. Professional High Capacity Air Purifier for Gas, Smoke and VOC removal in rooms up to 35m2
Write a review ›
Review Summary - 5 out of 5 based on 4 ratings.

Bought a house and had all the carpets replaced, leaving us with the horrible VOCs produced by the new carpet. After leaving the Blueair Pro M with all the filters running for a week the smell was gone and over a year later the air in our young son's room where we have left it smells noticeably cleaner and fresher than anywhere else in the house, including other rooms which have Dyson, Philips and Vax purifiers in them. Best product I have purchased in a long time and some day I may replace all the household purifiers with Blueair.

Does exactly what it is supposed to do, very simply: having had new carpets, beds and other furniture fitted in and around our new home it had the malodourous stench of VOCs gassing off. Within an evening the smells are gone and the air is much safer for my little one to breathe. Smart, elegant and a joy to setup and see working.

Have only just purchased this. But first impression are good. Being a smoker my better half who isn’t believes it seems to work but time will tell. Good service from the company.

I'm very pleased with this, it's very quiet and certainly seems to do what it says it should.

September 8, 2018
Patricia Thorneycroft
Showing 4 of our total 8 reviews, with an average rating of 5 stars. Read all 8 reviews for M Smokestop. Professional High Capacity Air Purifier for Gas, Smoke and VOC removal in rooms up to 35m2
Write a review ›