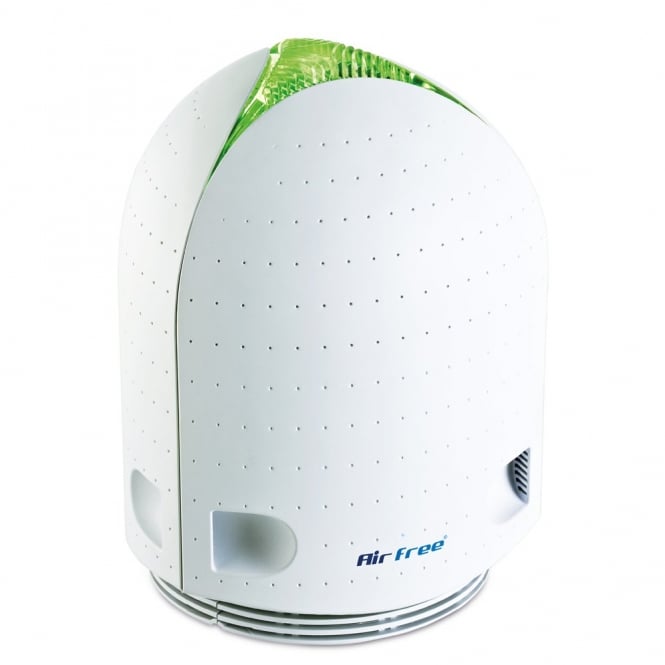 The new Airfree P150 Iris eliminates up to 99.99% of airborne impurities in large rooms up to 150 cubic metres. The patented technology is totally silent, environmentally friendly and requires no filters.

Breathing Space are delighted to announce the launch of Airfree's newest air purifier, the P150 IRIS.

The World's Safest and Most Tested Air Purifiers.
The Iris eliminates up to 99.99% of airborne impurities in large rooms up to 150 cubic metres and uses the same patented technology found in all other Airfree models. The secret to its ability to destroy even the smallest viruses, allergens or hazardous pollution, is in it's internal ceramic core which silently draws in the particles and incinerates them in less than a second.

What type of pollution does the Iris destroy?
The Iris typically destroys all airborne allergens such as Pollens, Pet Dander, Dust Mites, Ozone, Organic Odours and Mould Spores. In addition to this the technology also incinerates all Viruses, Bacteria and Microorganisms including traffic pollution and the commonly quoted PM2.5 Particle.

Who Typically Buys an Airfree?
Anyone who simply wishes to be sure of breathing the purest air possible in the home or office can benefit from using an Airfree, however in the 20 Years since the first Airfree was launched, it has also become known for being especially beneficial to anyone suffering from Asthma or other respirable problems due to it's ability to not only trap allergens and mould spores , but to actually destroy them and inhibit their return. Also, as the unit is completely silent it has become the unit of choice for discerning customers who wish to purify the air in a bedroom, but do not want the noise issues relating HEPA air purifiers.

Environmentally Friendly. No Ozone. No Ions.
It is now fairly well documented that many types of air purifier can actually exacerbate breathing difficulties and allergies because of the high amounts of Ozone and Ions they give off. The Airfree Iris is independently proven to not only be ozone free, but to also reduce ozone in a room by up to 26%. We know of no other air purifier which has been proven to be so environmentally friendly.

Low Energy Consumption & No replacement filters to buy.
Energy consumption and replacement filter costs are two of the biggest fears for potential air purifier buyers today. The Airfree Iris has no filters to replace, and yet still manages to clean the air to a higher degree than any filter based purifier you can buy. In addition to this, the running costs are even lower still as it uses only around 52 Watts of power when in use.

Choose your colour to suit your mood.
Whilst purifying the air , the Iris has a unique colour change facility whereby the air outlet on the top of the machine cycles through a myriad of different colours at short intervals. There are nine different colours in the cycle, and you can choose to have any one of these displayed permanently, or switch them off all together. It is said that certain colours can be theraputic and Airfree have used this as the basis for creating the Iris and its sibling the Lotus to add a unique additional benefit to the very serious business of it's air purification credentials.

Unique Breathing Space 'New for Old' Warranty.
At Breathing Space we understand the important role that a genuinely effective air purifier can play for anyone who suffers badly from Allergies or breathing difficulties such as Asthma. We have therefore introduced our free new for old warranty. Should your Iris fail at any point within the first two years we will replace it with a brand new machine rather than carry out a potentially lengthy repair on your faulty model.

Buy the Airfree Iris today from Breathing Space with free next day delivery.