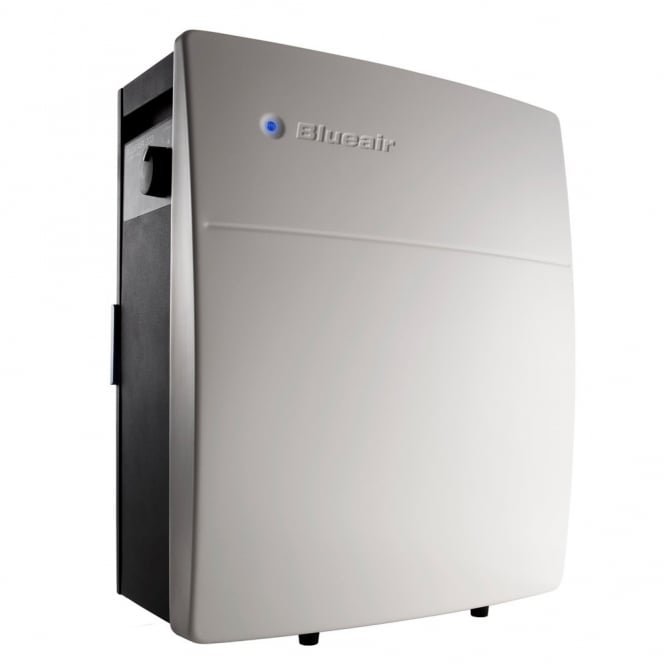 This 203 air purifier with Smokestop™ Technology effectively removes tobacco smoke, fumes, chemicals and odours better than any other brand we know of. The patented hepasilent filter also removes other pollutants such as allergens, pollens, mould spores, dust and pet dander. We think its the ideal companion particularly for anyone who suffers from Chemical Sensitivity or wants protection from smoke and odours.

Small, Powerful and Very Quiet.
The Blueair 203 Smokestop™ packs a complete, high-performance air purifier into a beautifully compact design that’s incredibly quiet. Although its lowest in class noise levels make the Blueair 203 ideal for bedrooms, it is also perfect for other small areas and work spaces to get rid of  airborne allergens like pollen, dust, smoke and mold spores.

Award Winning Swedish Design plus 5 Year Warranty.
The union of visually pleasing form and effective function is a hallmark of Swedish design, and Blueair is no exception. The Blueair 203 is designed for maximum performance in small rooms. The Swedish design is not only attractive but built to last.  Blueair are known for their durable construction that is made of galvanized steel and is powder coated for durability and environmental protection that produces no chemical off gassing. The reliability of Blueair purifiers is such that every unit sold in the UK now comes with a full 5 year warranty. The air purifier housing itself is very easy to clean, and won't pick up grime and oily stains the way that many plastic units can.

How does it work?
The Blueair 200 Series Air Purifiers intake air through the back of the unit. This air is passed through the pre-filter where large particles are trapped, then through the electrostatic HEPA-type filter where the small particles are trapped, and then through the ionization chamber where the air mixes with negative ions. Negative ions are then released with the clean air through the top of the unit. The ions collide with the particles in the room air and the particles become charged. When the air cycles back through the unit, the charged particles cling to the electrostatic filter media. The combined filtration technologies allow the Blueair Air Purifiers to achieve 99.97% filtration efficiency, down to .01 microns.

Tobacco Smoke
If tobacco smoke is part of the problem in your home, then this version is definately the one for you. The SmokeStop filter is made from progressive carbon with a honeycomb-type structure that improves airflow and has hundreds of odor and gas absorbing carbon pellets. The filter contains 2.0 lbs of coconut shell activated carbon impregnated with a 70/30 blend of Potassium Hydroxide (KOH) and Potassium Iodide (KI). The carbon eliminates volatile organic compounds (VOC), which are responsible for odors. The SmokeStop filter is recommended for use in rooms where heavy gaseous pollutants such as cigarette and cigar smoke or other VOC's are present.

Showing 4 of our total 16 reviews, with an average rating of 5 stars. Read all 16 reviews for Blueair 203 Smokestop Air Purifier
Write a review ›
Review Summary - 5 out of 5 based on 4 ratings.

Purchased the blue air and didn't expect to much as I had heard that these things do not really work with smoke. Well I could not have been more wrong. Me and my partner both smoke and were sick of having to re decorate each year or so, now we walk into the room and the air feels and smells normal it should save on the decorating costs to. The only thing is when you turn it up to say 3 you can hear it over the TV or music playing, but for a normal size room the 1 setting is more than adequate to clear any smoke. We are very happy with the Blue air and I am thinking of buying another for my parents for Xmas.

Breathing Space were so helpful on the phone,it was delivered the next day from ordering, very well packaged. It's been a godsend, I have C.O.P.D, Asthma and suffer from allergys and we have open plan lounge and kitchen, AND there's a tumble dryer in there too that kicks out a lot of dust. You could say it's definitely been tested, it's great and does what it says. I wish I'd got it sooner.

I was suffering an allergic reaction to pet dander from my new puppy. I had an itchy rash on my chest and arms and was coughing. Within an hour of putting the Blueair 203 Smokestop Air Purifier on I noticed a difference in my breathing and the coughing stopped. The itch, rash and coughing have all stopped now. I move the air purifier into my bedroom at night as advised by the Breathing Space representative and I sleep better and feel more refreshed when I wake up. I have the air purifier on all the time at the low setting and it is so quiet, you would never know it was on. I'm so glad to have bought it and would recommend this product to anyone.

April 16, 2015
Caroline Goodship
Showing 4 of our total 16 reviews, with an average rating of 5 stars. Read all 16 reviews for Blueair 203 Smokestop Air Purifier
Write a review ›